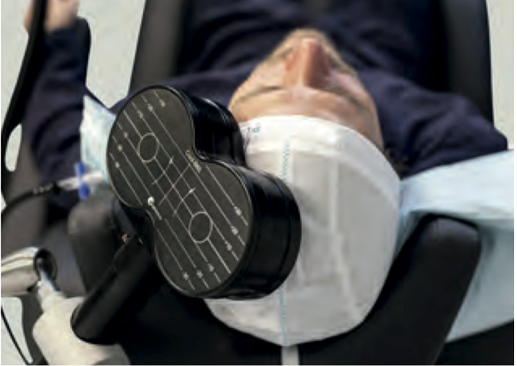 rTMS (repetitive brain transcranial magnetic stimulation) to cure major depression disorder (MDD).
In our center (www.neurolacote.ch) we perform brain rTMS, which is an already a well-known treatment for major depression.

This technique is able to modulate the electrical cortical potentials by the mean of a coil (placed on the head, FIg 1) which provides a repetitive electromagnetic induction of the brain. Low frequency stimulation (<= 1 Hz) reduces the neuronal excitability, whereas high-frequency stimulation (>= 5Hz) enhances it. The dorso-prefrontal-lateral cortex (DLPFC) of the brain is crucial for the emotional control.

More then 40 studies indicated that rTMS can lead to long-term and sustained remission of treatment-resistant MDD and improve the quality of life. 50% of the patients respond positively to the treatment and 32% have a complete remission of the depressive symptoms. The rTMS is also known to improve the antidepressant effects of psychotherapy or drugs such as paroxetine or escitalopram. rTMS could be performed even for pregnant patients. Side effets are mild (generally mild discomfort at the stimulus site of the scalp).

rTMS is contraindicated in patients with a history of seizures although the incidence of such complication is quite low (<0.1%). Different protocols of rTMS (as outpatient) are possible for depression over 3-6 weeks. Many patient needs a unique traitement. However, for some of them it is possible to repeat the treatment (every 4 or 6 months). The psychiatrist should contact us (www.neurolacote.ch) to introduce his patient with MDD. The rTMS is a valid alternative for patients having sides effects of antidepressant drugs or resistant to common pharmacological thérapie.